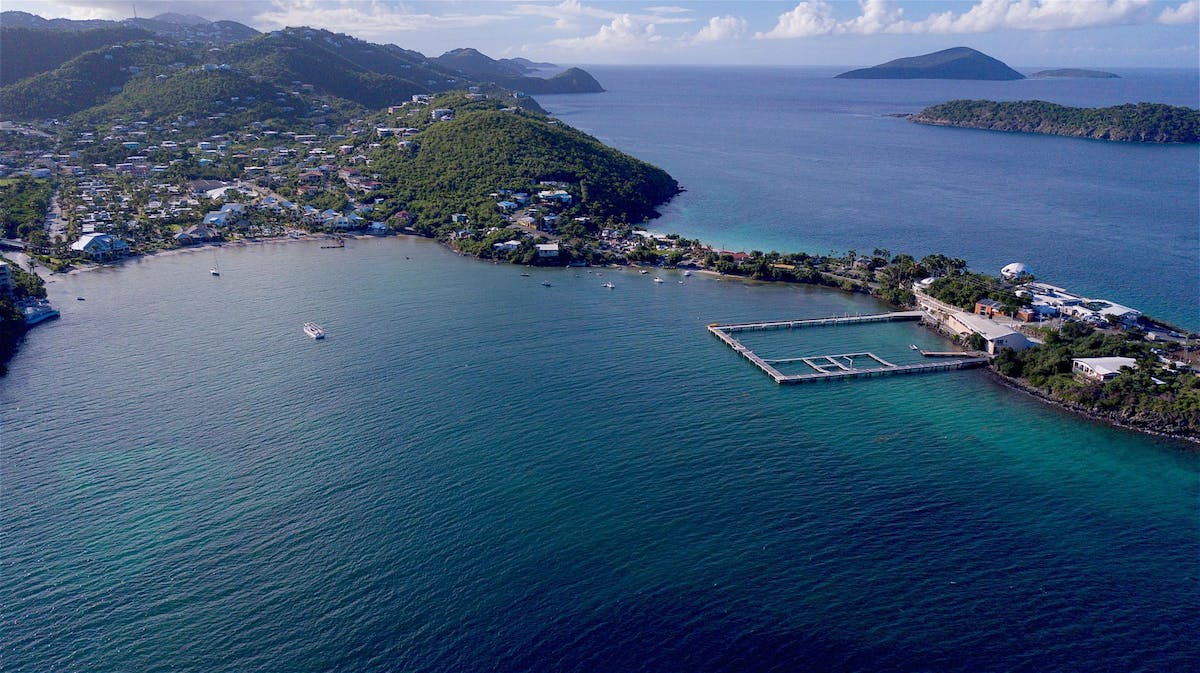 According to the local newspaper, much of the U.S. Virgin Islands territory shut down on November 8 due to severe thunderstorms that brought torrential flooding.  The flooding was so severe that Government and schools closed throughout the territory.  As seen from aerial photos and local video from around the islands, the rain event caused lots of damage including washing cars roads and stranding people in their homes and at work.  Water Bay, which Coral World monitors 24/7, received significant amounts of runoff from the Smith Bay watershed.  While runoff occurs during heavy rain, the severity of this event was unusual.

Improper human development is the primary contributor to runoff in heavy rain. Coral World, through a related foundation and with the Virgin Islands Conservation Society, was the primary funder of a study to develop solutions for this environmental issue here in the Smith Bay Watershed.  Local and stateside scientists have come up with innovative solutions to reduce or eliminate this runoff situation, but these solutions will require time and resources including local support to implement fully.

When freshwater meets seawater, mixing is not immediate.   Because it has a lower density than seawater, fresh water spreads in the form of a lens in a surface layer on the seawater.  This phenomenon is well known in areas where there are large river systems flowing into the sea and glaciers.  It is a characteristic that supports the survival of many species among them anadromous fish like salmon that spend most of their adult lives at sea but return to fresh water to spawn.  They use the fresh water lens to help them adapt from freshwater living to their oceanic lives. Entire ecosystems are built on the runs of anadromous fish. Freshwater from the Amazon creates a barrier to the spread of species between the North and South Atlantic.

For scientists, measuring and understanding the extent of the freshwater lens is key to oceanographic measurement and to marine animal science for programing satellite tags and temperature and depth recorders.  For Coral World and Water Bay, the identification of a freshwater lens is critical because its presence or absence helps us predict the severity of impact the to marine ecosystem.

A freshwater lens as dirty as the one we experienced on November 8 is temporary and it floats above corals and other marine animals and moves out of the area quickly.  Less than 24 hours after reaching our Dolphin Habitat in Water Bay, the lens had cleared the area causing little more impact than dramatic photo opportunities. Intense mixing is more problematic and longer lasting.  Hurricanes frequently cause much greater impact because the mixing of the freshwater and seawater is much more thorough.  A hurricane drives freshwater deep into the water column and causes much greater disturbance to the ecosystem.  Still, the marine has handled the insult of hurricanes for millennia.

Coral World respects the well-meaning concerns expressed on social media about the effect the runoff they witnessed through images would have on our animals in Water Bay. We want to assure the public that we monitor Water Bay 24/7 and understand the likelihood of severe weather events. Coral World has planned for and made significant investment in the health and safety of our animals as approved by the local Division of Coastal Zone Management, the U.S. Army Corps of Engineers, and the U.S. Department of Agriculture.  The plans involve a complex series of assessments by our staff with the goal of getting the animals out of harm’s way.  Depending on the nature of the event, we are prepared to undertake appropriate procedures to accomplish the goal.  Coral World staff are trained and experienced in ensuring the welfare of our animals. We have the knowledge and commitment to manage the Water Bay facility.  We have invested in proven technology and addressed the management of severe weather events in our permit applications by explaining our contingency plans.  We have drilled our plans and even tested them in Irma and Maria, and we are confident that we can protect the health and welfare of our animals in Water Bay.