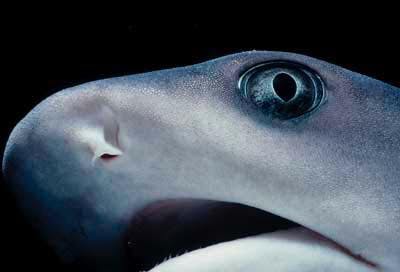 Happy shark week everyone!! Sharks are a beautiful sight to behold but can they see how beautiful the world around them is? In studies of sharks eyes it was found that most sharks have excellent vision and have both rods and cones in their eyes like us. Rods enable them to see light and dark whereas cones see colors. Though we aren’t sure how they interpret color we know they can see it within varying degrees depending on the species. Sharks can also see stereoscopically (with both eyes) or monoscopically (with one eye). This allows them to focus better on one item if they want to and by moving their heads back and forth while swimming, it also means they can get an almost 360 degree view around themselves with the exception of two blind spots; right in front of them and right behind them. Sharks also have the ability to see well in the dark because of a layer of mirrored crystals behind their retina called tapetum lucidum. It reflects light giving them a second chance to see the image as it goes through the retina again. This layer also makes it so they can see in murky water and means they can see 10 times better in clear water than humans can. Your cat has the same layer. Your cat also has a nictating membrane just like sharks do. If you’ve ever slowly woken your cat up you may have caught a glimpse of this extra eyelid roll away. This extra layer protects the shark’s eye as it attacks prey. Not all sharks have it though great white opt to roll their eyes back in their heads to protect them.
Now not all shark eyes are exactly alike in size. Sharks who are attacking larger, fast prey or live in the pelagic (0-200 m) and upper meso pelagic (200-400 m) have larger eyes due to the fact that they live in areas with more available light. However, sharks living in the bathylpelagic zone (1000-4000 m) have small eyes and large pupils. This helps them not have increased visual acuity but also see bioluminescence. So sharks may be seeing the ocean better than we could ever.