Meet Remo — One of Our South American Sea Lions 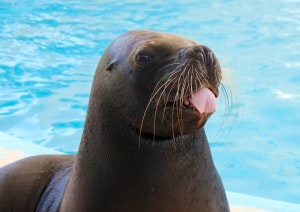 Let’s meet Remo! Remo is one of four South American Sea Lions that call Coral World home. If you’ve been following our Coral World blog, you’ve already met Franco, our large and relaxed dominant male. Now it’s time to meet his right hand man, Remo! Weighing in at almost 400 pounds, Remo is quite a bit smaller than Franco, but what he lacks in size he makes up for in energy and intelligence.

Anyone who has been in the pool with Remo knows that he can make some waves! He is notorious for zooming around the pool, doing cannonballs, and occasionally starting huge splash fights with unsuspecting swimmers.

If you come to meet Remo, expect to see him demonstrating a large variety of impressive behaviors! He knows more behaviors than any of our other sea lions and one of Remo’s favorite things to do is learn new things. However, like many ten year old boys, Remo does find it hard to stay focused on one thing for very long. In order to help him out, his trainers at Coral World have taught Remo a signal that tells him when he can run off and do his own thing. This way, trainers can reward him for his hard work with a well-earned opportunity to explore and look around his environment. Impressively, by giving Remo regular “breaks” his attention during sessions has really increased!

All in all, Remo is a blast to hang out with! To really get to know this guy you have to come and meet him for yourself. Hope to see you soon!