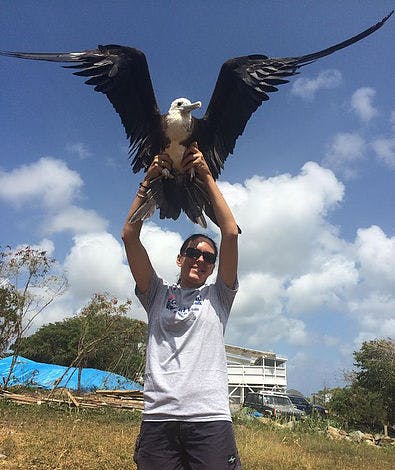 Mira, a juvenile frigate seabird, was found March 7th on a St Thomas beach. Unable to fly, her right wing had been damaged and was dropping badly. The Coral World rescue team got the call and went out to assess the bird’s needs. They took her for X-rays that revealed no fracture, but a significant soft tissue or tendon injury. Mira was brought back to Coral World for housing and care while she was rehabilitating.

After almost five long weeks of constant care and immobilization therapy, Mira still had 2 more weeks of physical therapy to go. She needed to help rebuild her lost muscle tone that occurs from being immobilized for 5 weeks. Once Mira was medically cleared, she was able to be released back into the wild. When the happy day arrived on April 26th, her caregivers took Mira to a remote spot on Coki point and released her.

The release was emotional to say the least. Saying good-bye to Mira, after watching her grow stronger and cheering her on every step of the way. Once released, she made a couple low laps around the field just to gain her bearings. She then slowly made her way up into the thermocline (a thin but distinct layer of atmosphere in which temperatures change more rapidly) over Thatch Cay. The caregivers lost sight of her as she climbed up high in the air. Their best guess is she probably flew over or past Hans Lollick and out of sight. Goodbye Mira, be safe.

To follow Mira’s story or to see other rescues use #awesomeericavi or #debrisfreeseavi for beach cleanups and environmental news.